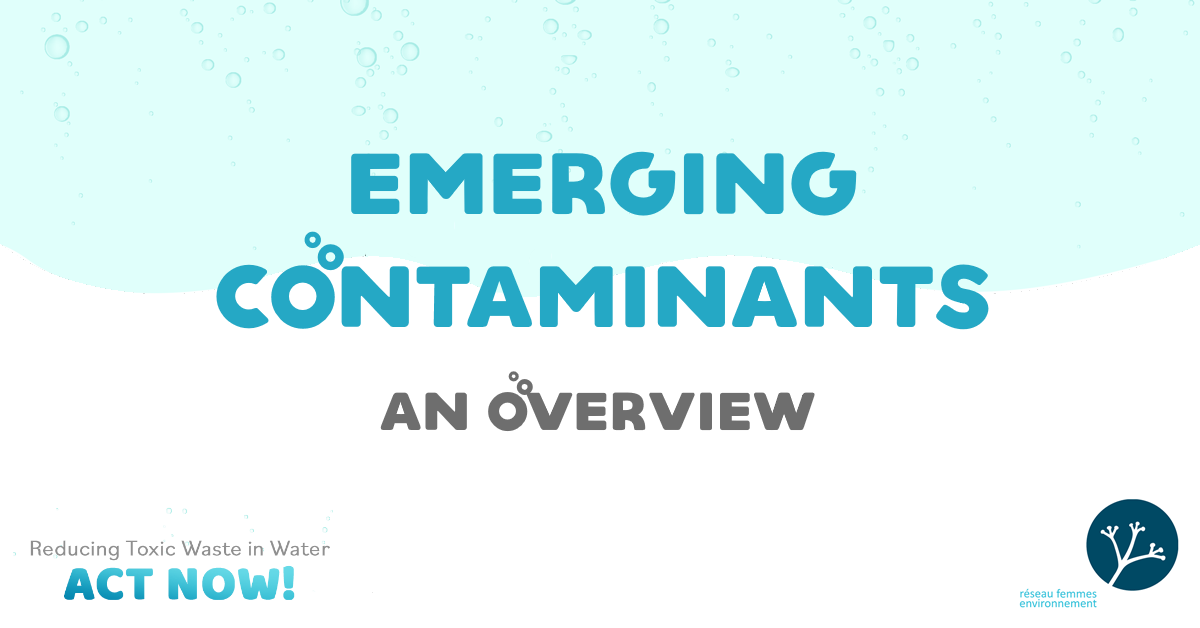 We increasingly hear about emerging contaminants, but what are in fact contaminants? How are they different from pollutants? What does emerging mean when it comes to contaminants?

The glass of water analogy

Picture a glass of pure, clear, transparent water. Now, imagine adding a drop of red food coloring to the glass. It will dilute in the water which will lose its purity. It remains drinkable, but it now has been contaminated by a small amount of food coloring. Thus, in the glass of water, there is now a new substance in higher concentration than what is normal for pure water.

Physical, chemical or biological pollutants are also considered contaminants when their concentration is higher than normal in any given environment. Contaminants become pollutants when they have documented harmful impacts on the environment, fauna, flora, or human populations. If, instead of food coloring, arsenic was poured in the glass of water, the contaminant would pollute the glass of water and make it improper for consumption.

The case of medication

A number of substances are used daily to save lives and to reduce the symptoms of various health problems. New technologies allow scientists to measure increasingly small concentrations of these substances in water. Thus, concentrations smaller than 1 ng/L (nanogram per liter) can now be detected. This is like detecting a cube of sugar in a bowl of water as large as the Montreal Olympic Stadium which is about 2.15 ng/L. This is how Segura and al. (2007) have been able to observe that more than a ton of antibiotics were thrown into the Saint-Laurence River yearly even though it went through water treatment plants. The antibiotics were not in themselves toxic for the Saint-Laurence River flora and fauna, but they contributed to the development of bioresistance.

Other medication such as antidepressants which are found in important concentration in water (Lajeunesse and al., 2008) have undesirable effects on aquatic species. It is the case of ibuprofen which can increase the size of female medaka fish's livers as well as reduce the size of the male's livers (Flippin and al., 2007). Also, benzodiazepine, a drug used to treat anxiety, has resulted in changes of behaviour in European perch populations which became more active, less sociable, and started eating more (Brodin and al., 2013). An increasing number of scientific research demonstrates the harmful effects of medication on the environment, but the lack of data means that medications are considered contaminants of emerging concern (since their effects remain insufficiently documented).

In the category of well-known substances that had been put aside for a while and are now regaining popular attention, lead comes to mind. Well-known and largely used for a long period of time, it was only in the 80s that lead's neurotoxicity was documented. Since then, the domestic and industrial use of lead has changed drastically. Over the course of about 20 years, its concentration in the environment has lowered to about ten times less than it was (Boutron and al., 2004).

However, at the end of 2019, lead was put forth in the news again because of its presence in Montreal schools (INSPQ, 2019; Touzin, 2019). Although the concentration of lead in schools was much lower than what was considered toxic in agriculture, it appeared to have concerning effects on human health. This is when lead became a contaminant of emerging concern (or of re-emerging concern). This substance can alter the normal functioning of kids' brains and have irreversible effects on cognitive development. Even if the amount of lead measured can't cause death, it is still associated to an alarming chronic toxicity level (Power Of Prevention, 2014).

Let's now look into DDT, also known as dichlorodiphenyltrichloroethane. For a long time, it was used to limit the spread of lice, flies, and mosquitoes and was considered to have saved many people of malaria and typhus thanks to its insecticide capabilities. During the Second World War, people would be sprayed with DDT which was then considered harmless to humans. A while later, when negative effects were observed on various animals, research showed that DDT could harm all species rather than just insects. Rachel Carson's Silent Spring (1962) shed the light on how DDT caused the death of birds and fish in the fields where it was used and allowed it to be considered first a contaminant, then a pollutant. DDT accumulates in animals' fat tissues all along the food chain. It reduces, for instance, the thickness of egg shells which causes eggs to break and baby birds to die before birth. It also causes increased mortality in young fish populations.

Medication, lead, and DDT are not the only three substances that are concerning. Scientists regularly discover new concerning molecules and although more and more research is done, their impacts still remain largely unknown because they interact with a lot of different substances in the environment. They thus keep the status of contaminants of emerging concern. It is indeed possible to learn about the effects of a given contaminant in a lab, but it is much more difficult to predict how it might interact with other substances present in the environment, to know what its degradation compounds might be and how they might react. In many cases, it is these interactions between a substance and its degradation compounds as well as other substances that are found in the environment that are of emerging concern.

Can we protect ourselves from contaminants' potential harmful effects?

We can foster change! There are several ways to protect ourselves from potentially dangerous contaminants of emerging concern. Here are a few examples:

Here are some resources available on the subject:

Power Of Prevention. (2014) Little Things Matter: The Impact of Toxins on the Developing Brain - YouTube